Truth about Azam Baki and a bit on Johor election

It was quite comical to see many people (especially pro-Pakatan crowd) jumping all over the place after Securities Commission cleared MACC boss Azam Baki from any wrong doing.

They are now accusing the SC of not being independent and doing government's biddings.

I even have a young friend who complained that youths would find it hard to understand why SC came to such a conclusion.

I actually felt like telling him that young people should go through life more before thinking about such things but stopped myself from doing that as I know that would be pointless and politically incorrect in this age of Undi18.

Well, I believe my friend and other young people like him shouldn't worry too much about not finding the truth.

In case everyone forgets, Azam Baki has sued the self-styled journalist who started the whole accusation against him and they are going to court.

In court, everything will be put in the open and there will be nothing to hide.

So, Azam Baki will try to prove his innocence, while the journalist will reveal everything she has against him.

Everything will be factual, right?

No more trial by media or public lynching by street mob. 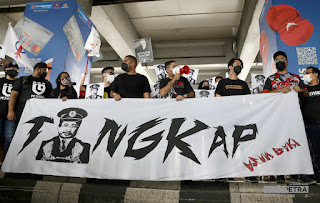 For those who already believe that Azam Baki is guilty, they should take comfort in the knowledge that the journalist is supposedly a lady of integrity and has been hailed as a heroic whistle blower.

Surely she would have all her facts ready to be presented in court for all to see.

Surely she didn't buta-buta accuse Azam Baki of being a corrupt person to suit the agenda of some politicians who wanted to paint the establishment as being a vampire that is drinking the blood of the rakyat....correct?

Well, just wait for the trial then, okay.

It's going to be either Azam Baki being factually proven to be a corrupt person or he'll get RM10 million from the journalist for defaming him.

As dramatic as a Korean courtroom drama, I think.

Moving on to the coming Johor election, I have to say that my sources in the state are still quite reliable.

They got it right that it will take place not long after the CNY celebration next month.

I believe they are going to be right again about the outcome of the poll.

They said BN will win with a landslide, sweeping the others into the longkang.

Okay, DAP will survive by clinging on to the edge of the longkang because they will still win in the Chinese-majority areas.

The only unfortunate thing about the coming state poll is that Khaled Nordin will almost certainly be fielded in his former state constituency of Permas and he will win there.

That's according to my sources in Johor too lah. Sigh.

They even said that Khaled will try to become MB again later on by using his CONNECTIONS.

But I don't believe them as I think they were trying to pull a prank on me.

Anyway, I hope to go to Johor once the campaigning starts.

I actually really hate writing without going on the ground.

Hopefully my boss will let me go there even though I know he can't belanja my trip because our company has not yet recover from the effects of Covid-19.

If I get the green light, I will go to Johor using my own money. Hopefully I have enough for the trip.