As far as I'm concerned, this is good news;

Anyway, I always like this Mazlan guy for his idealistic and outspoken character. 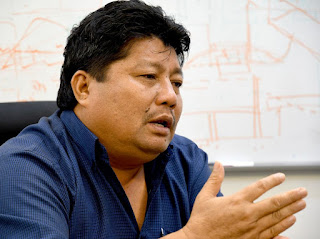 Mazlan, who was the Puteri Wangsa assemblyman is also a hardworking guy and not just all talks like so many other politicians.

Unfortunately, he only realised that Pribumi was actually quite messed up after GE14 and for that he spoke up about it.

That's how he got in trouble with Muhyiddin.

He actually didn't quit the party or his state exco post earlier because he felt obligated to serve his constituents and fulfill his duties in the state government instead of playing politics.

Mazlan is very much like his brother Maulizan, who was also a state exco member in the previously BN Johor government.

They are both idealistic, outspoken and hardworking.

Ok, I admit that the brothers sometimes looked a bit like some overweight funny gangsters in Korean comedy movies, but that actually suits their characters.

They looked rough but actually quite honest, which I think was better than all those handsome and sophisticated ,but deceitful politicians

Mazlan said he's not jumping to Umno or anything like that but instead he now supports BN knowing that the coalition is currently the best option for Johoreans.

I don't think he's a frog as he had on Jan 20 said that he was considering retiring from politics after fulfilling his duties.

Quite honourable if you asked me.

But too bad that he's retiring young as a character such as him is actually quite rare among politicians.

Well, I wish Mazlan all the best and hope that he remains true to himself.

Datuk Maulizan, if you are reading this, please take care of your brother. Don't let him ends up driving Grab or something like that to earn a living after this. I think Mazlan is actually quite capable of doing that rather than compromising his principles.