As I expected, DAP replaced its former Klang MP Charles Santiago with another Indian candidate.

Guess they need to really secure the 17 per cent Indian votes there. Probably because the 55 per cent Chinese votes in Klang may not be enough in the event BN fields an MCA candidate.

Ganabatirau's first statement after being selected for the parliamentary seat is this;

That's probably because he was one of the main characters in the sad saga of late fireman Adib.

When the incident at Sri Mariamman Temple in USJ happened in late November, 2018, Ganabatirau had quickly wrote on Facebook that a group of "Muslims" had attacked the Hindu place of worship.

Hundreds of Hindus then turned up to defend the temple with some engaging in rioting and burning vehicles.

Adib and his team were dispatched to the scene to put out the fires, only to be attacked by the rioters.

The fireman suffered severe wounds in the incident and later died. 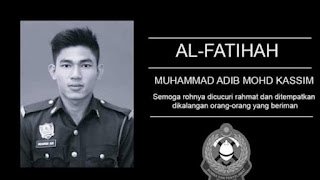 And that's all there is to it, as far as he was concerned.

Adib's death was the turning point for me.

I accepted his death as fated but racist arrogant comments such as by Ganabatirau and numerous Pakatan supporters following the incident convinced me once and for all that these people should never be allowed to rule this country again.

Well, I know that Ganabatirau will win in Klang and I have to endure seeing him in Dewan Rakyat after GE15.

The other BJP wannabe extremists in DAP will probably be there too as they had been given safe seats by their party.

Well, too bad for me.

Nonetheless, hopefully they will not be in power again this time.