Johor Umno has no need for gung-ho soundbites

My blogging sister Helen Ang has this posting,

This is Umno Johor! “We take no prisoners”

She has all sorts of impressive charts and even a gung-ho video of Sparta warriors in the posting.

No retreat, no surrender.

The guy believes in all that.

You are either with us or against us

of which I had stated my disagreement.

Previously, I wrote that I don't want to disturb Johor Umno anymore because it only has two and a half years to repair things in the state before the next general election.

But Helen's posting today compelled me to write this post about my home state.

Let me start by telling you all that I spent more than 80 per cent of my time between the general elections of 2008 and 2013 in Johor.

I was most of the time on the ground during that period, closely observing how Johor Umno was preparing the defence of the state.

By the way, as some have already know by now, I'm a Johorean.

Based on my experience in the State back then , I'm afraid it would be disastrous if the Johor Umno leadership adopt the gung-ho approach as championed by the Kempas assemblyman.


In my previous posting,
Time to fix Johor
I highlighted that,


And these are BN's 25 parliamentary constituencies which are in most serious danger of falling to the opposition in the next general election. 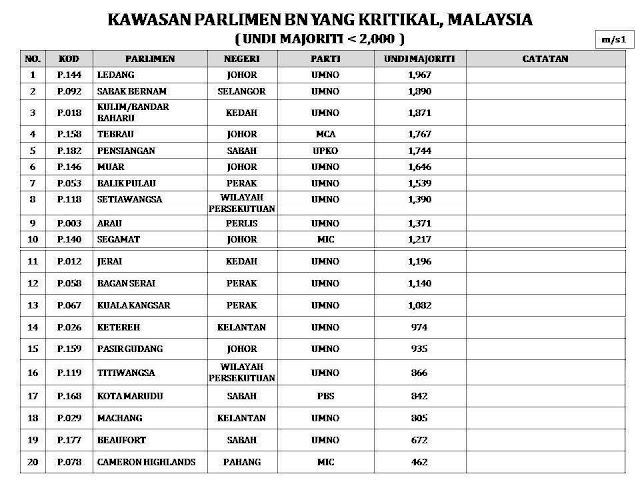 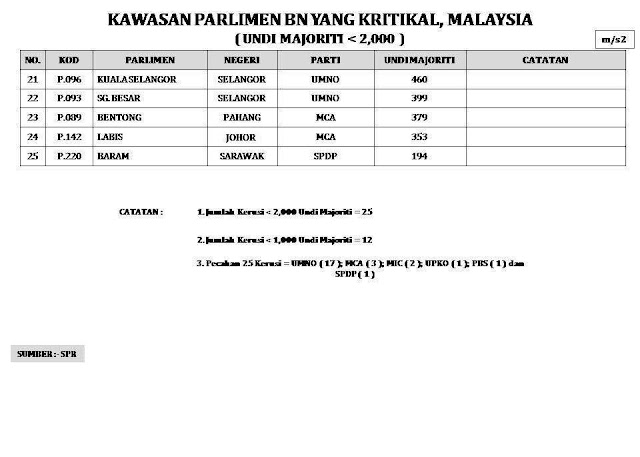 I got that from Apanama's  The Hijacked Bersih 4

Six of them are in Johor.

Those from my earlier list not in this line up are the five Johor parliamentary constituencies already won by the opposition along with Tanjong Piai, Johor Baru and Pulai.

Well, you may think that Shahrir's seat in JB is safe because of his over 10,000 majority but bear in mind that the man will be over 70 years old in the next general election and he has no successor in sight. If he can lose about 15,000 majority in the last general election, it may not be impossible that he can lose another 10,000 in the next one. After all, the Malays who enabled him to win in JB are the so-called urban Malays. They are the ones that some Umno people think the party can afford to ignore as they believe their support comes from mostly rural Malays.

As for Wee and Nurjazlan, you all can see that they have lost a huge chunk of their majority. Knowing the ground at their constituencies, I tend to say there is no guarantee that they are not going to lose whatever left they have in the next general election.

So how Johor Umno?

Still think it's better to have a policy of "either you are with us or against us"?

Still want to chop off those who still love Umno but not in the bandwagon of PM DS Najib Razak?

I'm quite sure Johor MB DS Mohamed Khaled Nordin would not be very comfortable if you all ask him that question.

As for our hero Tengku Putra Haron Aminurrashid bin Tan Sri Tengku Hamid Jumat, this is the electoral results of his Kempas state constituency,

Actually, it could be worse.

Let me tell you the reason why I said that.

Back then before the 2013 general election, Nurjazlan was having problems with the right wing members of Umno in his constituency.

Most of them are Perkasa members.

Well, the rather liberal Nurjazlan is after all biologically just a quarter Malay.

But to his credit, the chubby handsome guy didn't go super macho and declare "either you are with us or against us" nor did he try to crush the dastardly Perkasa gang.

He instead invited the now evil Tun Dr Mahathir Mohamad to his constituency for a gathering with mostly the Perkasa boys.

As a safety precaution, Nurjazlan brought along his mother to that gathering which was held somewhere in Kempas.

It was said that Dr Mahathir have a soft spot for Nurjazlan's mother and her presence was a guarantee that the handsome old man would not do funny things like turning against him at the gathering.

Here is the link to Big Dog's report on the gathering that night in Kempas, 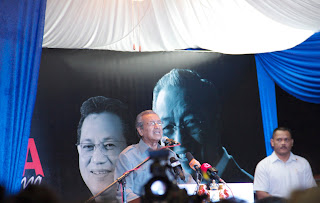 The whole thing went well and the problem between Nurjazlan and the Perkasa gang was solved.

That basically solidify Malays' support for BN in Pulai and prevented the constituency from falling to the opposition despite the loss of almost 17,000 of Nurjazlan's majority.

If not for that, I suspect everything including the Kempas assemblyman could had been swept away by the Chinese tsunami.

What I knew was that Johor Umno had in the run up to the general election chose for its hard working liaison executive secretary Ramli Buhani to replace Osman Sapian in Kempas.

He was said to be chosen for Kempas by Najib himself.

Honestly, I got nothing against him except now that I disagree with all those macho talks.

Johor Umno that I knew didn't rely on being macho or gung-ho to win elections.

It relies on being dignified, service-oriented and upholding good values to win over the hearts and minds of the people, especially the Johor Malays.

I once heard Khaled said that 83 per cent of Malays in the state voted for BN in the last general election, which was why the state didn't fall to the opposition despite the massive Chinese tsunami on polling day.

I agree with him.

Next time, I will write about how such a high percentage of Johor Malays' support could be achieved by Umno for BN in the state.

For now, I just hope everyone including Helen can stop making nonsensical soundbites such as

This is Umno Johor! “We take no prisoners”

That's not how Johor was made the tiang seri of the party.

(Note: No nasty remarks about Helen Ang allowed in this blog as she had requested me not to publish them. Go to her blog if any of you feels like doing that.)
Posted by Annie at 04:50