Muhyiddin-Shafie boost for the Umno rebellion

The duo were today with Tun Dr Mahathir Mohamad at a Press conference at the Perdana Leadership Foundation in Putrajaya. 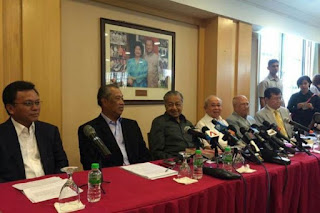 The PC was about former Umno branch leader Datuk Seri Khairuddin Abu Hassan and his lawyer Matthias Chang being charged under the Security Offences (Special Measures) Act 2012 (Sosma) for economic sabotage, but the presence of Muhyiddin and Shafie there was more significant as it marked an outright escalation of the rebellion against Najib.

Both Muhyiddin and Shafie were stripped of their ministerial posts in a recent Cabinet reshuffle.

It was a known fact that the duo were removed from Cabinet because they have voiced their disagreement with the way Najib was handling things, particularly concerning the 1MDB issue.

Muhyiddin and Shafie however still hold their party posts.

The way I see it, both are now going for broke.

They knew that they got nothing much to lose.

As it is now, Muhyiddin and Shafie were being isolated more than ever after they no longer hold any position in the government and their roles in the party being gradually reduced.

They knew that Najib will eventually remove them altogether later on.

Najib was expected to do so when the situation becomes more stable and the duo are no longer in the position to influence members to support them following their diminishing roles in Umno.

Now, with the duo openly opposing him by being on the same platform as Dr Mahathir, I believe Najib can't afford to wait anymore.

He has to sack them right away.

Otherwise, it will be very difficult for him to manoeuvre as the party president, especially with the Umno general assembly just being a few weeks away.

I just can't imagine how it's going to be if Muhyiddin and Shafie are still there.

They will definitely attack Najib in their speeches which they will deliver in their capacity as deputy president and vice-president respectively.

On the other hand, sacking the duo from the party may also be bad for Umno.

The split among party members will worsen and Umno may not be able to recover in time for the next general election, scheduled just over two years from now.