This is the front page of NST today, 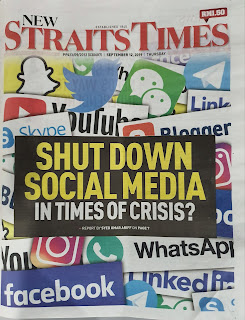 You can read the report by clicking on this link;

Social media ban in crisis gets an aye

Personally, I think it's a totally insidious bullshit.

I dare say that it could be an early step to further muzzle Malaysians.

Since this report is by NST , which was and is linked to the powers that be, I'm taking it as an early warning that the government may in future shut down the social media if it deems the country as being in crisis.

I believe they will use whatever survey quoted in the report to tell everyone that Malaysians are okay being shut up in time of crisis.

Who the hell exactly these people who did the survey?

Not even the previous BN government, said being so evil, had ever tried to shut down the social media.

Heck, not even the communist government in Beijing had resorted to such measure to clamp down on the ongoing protests in Hong Kong.

It's definitely not its bloody job to shut up people.

When they campaigned for GE14 the Pakatan leaders promised freedom of this and that, but now that they are in power, they are mulling to shut up everyone, are they?

Crisis? What is that? Is it for the government to define what is a crisis?

This currently terrible haze is a crisis to me. Does it mean the government should shut down the social media?

Anti-government protesters defying police in down town KL. Is that a crisis that warrants the government to shut down social media?

If yes, then the people of previous BN government were really fools for not doing it back then during all those Bersih rallies and such.

Well, let's wait and see where this whole thing is leading to.

For all I know, this Pakatan government may be worse than the communist regime in Beijing.
Posted by Annie at 16:18