I was busy running around attending to a very important personal matter today.

No time to check what's happening the whole day.

Very late in the afternoon, a journalist friend called and updated me on what happened at Padang Merbok where the Blackout 505 rally took place.

My friend who is pro-Pakatan but works for a pro-BN newspaper sounded very dejected. She just got back from covering the rally.

I then checked the websites to verify what my friend said.

The pro-Pakatan Malaysiakini estimated the crowd at its maximum of about 30,000.

I called back my friend and asked her to double check her figure with that of the one quoted by Malaysiakini.

"Malaysiakini is exaggerating. I know because I was there," she said, sounding annoyed.

Then there is this report by the pro-Pakatan Free Malaysia Today at the end of the rally,

The report also estimated the crowd at 30,000, but the writers of the article clearly sounded disappointed by what they witnessed.

I suspect the FMT writers had double-checked with their colleagues at fellow pro-Pakatan Malaysiakini and they then agreed on mutually quoting that figure for the sake of consistency. Journalists from both sides are known to do that.

Another notable thing about the rally is the lack of participation by the Chinese.

Yes, there were some among the crowd but it was nothing like during the rallies before GE13 or immediately after that.

The Chinese seems to be backing off this time. The only notable DAP leader present to give a speech at Padang Merbok was Lim Kit Siang.

I think Helen's analysis on the Chinese lack of enthusiasm for this rally is the best explanation of what had happened,

I believe that the failure of this rally will mark the turning point for BN to regain their lost ground.

Finally, I believe I am now seeing the light at the end of the tunnel.

I hope DS Najib Razak and his team (stupid advisors and consultants excluded) will seize the opportunity and use it as a foothold to launch their push towards GE14 five years from now.

It's clear now that the general public, with the exceptions of the Malay lunatics of PKR and Pas are getting tired of Anwar and his drama. 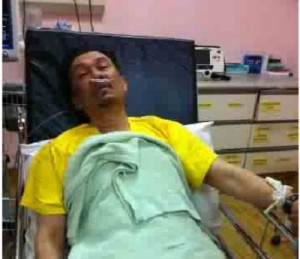 Yes, even the Chinese DAP are tired of him.

Note on another matter:

For the record, I'm with Helen over her disagreement with Bujai and Stop the Lies. I totally support her when she wrote,