A friend yesterday complained that I have not been writing for almost two weeks.

Well, I was actually busy doing other things.

There's my work and also Oshin.

Ya, Oshin is that old Japanese drama from the early 80s. 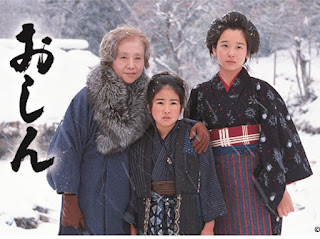 I first watched it with my grandmother when I was a kid. We love it so much.

Finished all 297 episodes of it again these past days. It's that good.

I recommend everyone who has a daughter to watch it with her.

It teaches girls to be good and tough, and that most (if not all) men are useless bastards.

Oshin had a rough upbringing being badly treated by her father and brother. When she's grown up, her business were repeatedly wrecked, first by her husband and then her son.

Oh, and her mother-in-law was bad too. Ya, some women are as bad as men.

Whatever it is, moral of the story is that girls need to stay tough and focused as well as believe in themselves to face the world.

As for what has been happening with the country, I honestly don't really feel the need to write about it.

It's been quite mundane actually.

Covid casualty number is still quite high but at least the vaccination appeared to be working and the situation seems to be improving.

I hope to go back to work in KL once the borders open. Ya, I'm now in the East Coast, enjoying myself here for the past two months.

As for politics, it's been thankfully rather quiet. Of course there were the usual chatters but nothing really significant. So, I'm going to leave it at that for now.

The only time I was actually tempted to write something these past few days was when there was that riot in front of a Taoist temple in Salak South.

That was a really stupid one.

But one of my friends beats me to it with this write up;

Learn from Adib’s tragedy; be firm with rioters

I agree with my friend about the need for the authorities to be firm with rioters but not so much when it comes to comparing the Salak South little riot with the Adib's tragedy.

Well, for one thing, the crazies in Salak South were Chinese, and they are Taoists some more.

After watching the video of the incident, I concluded that Taoist Chinese make lousy rioters.

They really should leave the rioting business to others.

I even laughed quite a bit watching their antics that day. Ya, especially so when I saw those ladies practicing their zumba in front of the temple gate while all the commotions were happening.

The police were very right not to use force  against them that day.

No way they could really hurt anyone, let alone kill a fireman.

Okay, maybe I'm a bit bias because my mother's side of the family are mostly Taoist Chinese but they are indeed quite a peaceful bunch.

Don't worry. We are not being ruled by the CCP who made the tanks rolled over and killed the protesters.

Still, the law is the law. Please don't resort to rioting, okay....especially if you are Taoist Chinese.

Next time the others riot, hopefully the police will act tough once again and beat the crap out of them....especially if they try to kill another fireman.

One more thing, talking about the CCP, there's this story yesterday;

They actually did that to mark the 72nd anniversary of them founding the communist state of PRC.

Yup, they celebrated the occasion by threatening to invade Taiwan by bombing Taiwanese, who are mostly Chinese.

Seriously, communists are not Chinese. Their ideology is not even a Chinese ideology. So, if you are against the communists in Beijing, it does not mean you are anti-China or anti-Chinese.

Oh, and here is what DAP thinks about the CCP which threaten to bomb Taiwanese into submission;

Hey DAP, why la you praise those communists at a time like this?

You all don't care ka for those Chinese in Taiwan?