Just talked to a journalist friend who is now in Tanjung Piai and according to him, things are really going well for the BN's campaign.

"The Pakatan candidate seemed a bit lost when he met the people on the ground. Maybe it's because all this while he spent more time in JB than here," he said.

Wee Jeck Seng, a well liked wakil rakyat when he was an assemblyman of Pekan Nenas and MP of Tanjung Piai doesn't seemed to have such a problem.

"Everyone knows him here," said my friend. 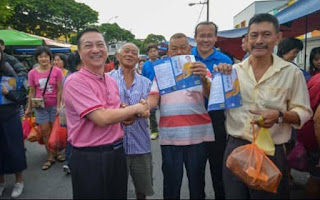 Well, that's what my friend said. I have to see it for myself and I'm planning to be there probably by Monday next week.

Hopefully I can stay in Johor till polling day.

Need to catch up with friends there too in order to get the latest on Johor politics, among other things.

I always believe that you have to be on the ground to be able to comment on the political situation there.

Arm chair reporting has never been my way of doing things and that's why of late, I have been refraining from writing too much about what's going on in my home state.

I have to admit that I'm out of touch with how things really are in Johor, being not there for quite a while.

Back then when I was in Johor, I always disliked it when people wrote about Johor from KL and pretended as if they were experts on the subject.

Anyway, while things appeared to be good down south, there have been a bit of rumbling here at the Umno top hierarchy.

That' has always been the problem with Umno.

The root is strong but the top quite often rotten.

This is a case of a gang, quite publicly accusing another of something, probably to strengthen their position in the party.

I'm not going into the details as doing so may plays right into the hands of Pakatan, but suffice to say that as far as I'm concerned, those involved are the same stupid selfish bastards who caused Umno's downfall in GE14.

They don't care about the party or the so-called perjuangan. All they care about is what they are going to get from the now resurgent Umno.

They can't even wait for at least until the Tanjung Piai by-election has been won.

For them, Umno is their property to be exploited for their self interest.

Umno people really need to know who these people are and reject them as their leader.

It's actually easy to identify these scumbags. They are the ones who still believe that they can offer money in exchange for positions in the party.

Umno people, if any of your leaders comes to you offering money in exchange for your support in the party, then you should know that leader is among those who are destroying your party.

Such leaders should not have a place in Umno anymore.

Also, when you read something which says bad things about one of your party leaders, just ignore it for now.

It's actually just one of those bullshits planted by those leaders who only care about themselves.

If they really care about the party, they wouldn't do that so publicly which in the end sows doubts on Umno recovery effort.

Help BN,  in particular MCA wins back Tanjung Piai first as it will lead to Putrajaya in the next general election.

Remember, Umno is now without power. Fight each other, for what?

Win first before you all want to talk about the stupid scheming and infighting.

To all Umno people, don't pay attention to the monkeys who are jockeying for power.