Great defender of the Nons

People, especially DAP supporters always asked me in not such a nice way why I hate Guan Eng and his father so much.

Actually, I don't hate them at all.

I'm just very much annoyed by them.

You can't hate people who were born to be annoying creatures but you do have the right to express your annoyance towards them, right?

Just look at this story from yesterday,

Hey man, we don't even know yet the detail of that Bill and you were already calling people racists and extremists.

The people Guan Eng called racists and extremists also already explained that it got nothing to do with non-Muslims and yet he still used such a strong language.

Trying too hard to portray yourself as the defender of the non-Muslims, aren't you?

Just like during the Sarawak election in 2011, when Guan Eng tried to be a defender of the Christians.

Well, he was actually at that time just trying to win over the majority Christian Ibans of that state.

This time, I think, he was trying to stay relevant by convincing the non-Muslims that he's their hope against racist and extremist Malay Muslims who are out to get them.

Not the first time he did that, actually.

Back in 2019, while still in power, Guan Eng declared that an Umno-Pas cooperation was a "declaration of war" on non-Malays.

That's how inflammatory he could get.

And who could ever forget the DAP's very racist campaign strategy of the 2013 general election which resulted in the Chinese tsunami.

As we know now, every action has its reaction.

The current government is now very much dominated by the Malays and other bumiputera.

Even if the next general election is to be held tomorrow, I believe we would still end up with the same kind of government.

The 22 months under Pakatan rule, led by people like Guan Eng thought the Malays and bumiputera that they can't trust such a set-up of people to lead them.

They trusted the bunch in 2018 only to later realise that Pakatan was not sincere to them.

Once in power, they showed their disdain towards the Malays and bumiputera by doing things that really hurtful.

The evidence was plentiful, as openly illustrated by Pakatan supporters' comments about especially the Malay Muslims in the social media.

The whole thing reached a boiling point when they defended perpetrators of a hate crime which resulted in in the killing of fireman Adib.

Adib's death was tragic enough, but those hurtful comments defending those who beat him up were what made me decide that this country must never be ruled by those people.

Pakatan lost one after another by-elections after that before it imploded in early last year.

Now Guan Eng is back with his old trick of  trying to scare the non-Malays again into supporting him and his party.

After all, he needs to stay relevant as I was told that even Anthony Loke is getting to be more popular than him among DAP people.

Well, Guan Eng has been churning out statements after statements every other days lately and so does his father.

This one is from today,

Haiyo, what does he expect KJ to do?

Take over the ministry and the number of Covid-19 deaths immediately drops to zero is it?

I think the KJ guy has been working his ass off la.

Yesterday, he even did a spot check alone at a hospital.

Vaccination rate has also been good, with almost 80 per cent of the adult population already being fully vaccinated.

Seriously, I think Kit Siang should worry more about his son than KJ.

He should advice Guan Eng not to try too hard portraying himself as a hero as it only shows that he's just a fake.

But knowing the old man, he would probably be cheering on his son.

Well, what to do. The Lim family has always been trying to be like the Lee family in Singapore.

Cannot la uncle. Your son is not handsome and smart like Hsien Loong. 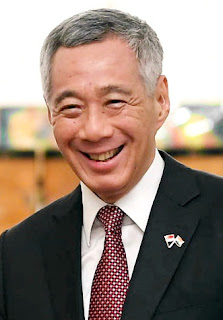 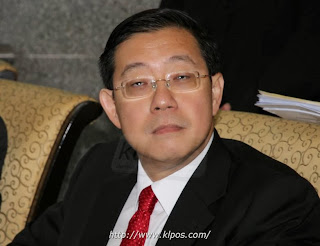 Seriously, just look at them, okay.