The rape of Gunung Lambak

Received pictures of what's happening in my hometown Kluang in Johor this morning. 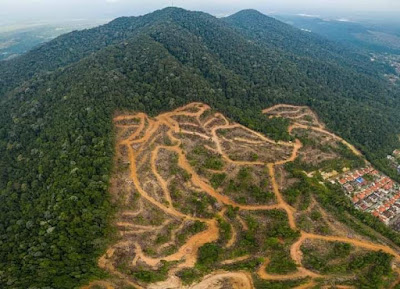 That's the slope of Gunung Lambak, Kluang's iconic natural landmark, now denuded of its forest cover.
Apparently, some 'developers' got to own the land and did that for probably another musang king durian project.
I was told that one of the "landowners" had lodged a police report against the person who took the picture using a drone for trespassing.
So petty.
Hopefully nothing bad happens to that person.
I also received this video on the effects of that "development" at Gunung Lambak in nearby area,
I do wonder what the authorities are doing about this whole thing as I was told the affected people are complaining but are being ignored.
Why?
Maybe they are waiting for some real disaster to happen before acting on it.
Ya, maybe they are waiting for headlines such as this; "Whole family wiped out in Kluang landslide tragedy".
Or maybe the 'developers' are too well connected that they can't do anything to stop the felling of trees and soil erosion in the area.
I hope I'm wrong and that the authorities are actually doing something.
Hopefully that new youthful Johor MB will act on this instead of making his usual meaningless stupid statements of setting up committees and promising stuff which sounded more like blowing hot air only.
By the way, I also learnt that elephants living in the affected areas have decided to move to safer locations.
My beloved who went back to our hometown for the Merdeka holidays the other day sent me a video of one of the elephants,
Yup, the elephants are now hanging around in downtown Kluang.
Their jungles are gone and they are scared of landslides too.
A whole gang of them even went to disturb people in the nearby small town of Kahang.
Okay, on this one, I'm not blaming the DAP MP and assemblyman in Kluang for doing nothing.
The Mengkibol assemblyman, I was told had tried very hard to get the authorities to do something but was not successful. They just ignored him.
For me, this is the fault of the state government.
They should have put a stop to the cutting down of trees at Gunung Lambak from the very start.
Seriously, I don't think anybody should even own land at such an important site that they could do with it as they please like that.
I know that it's too late to do much now, but at least the state government should try something to mitigate the problems caused by the felling of trees.
Hopefully they could move quickly before things get any worse.
If they still do nothing, I wouldn't blame the people of my hometown if they choose to vote for DAP again in GE15.
Why should they vote for BN when its state government care more about the well being of "developers" than them, right?
Annie at 10:57
Share