How the racial mess started

is now the official national art of self-defense.

PM DS Najib Razak announced this on Friday night at a gathering of about 15,000 silat exponents at Dataran Merdeka, Kuala Lumpur.

The gathering was fresh from the Himpunan Rakyat Bersatu rally a few days earlier where Pesaka, the umbrella body of silat associations in the country was the main organiser.

The rally , originally dubbed Himpunan Maruah Melayu was to counter the Bersih 4.0 rally, which was dominated by participants from the Chinese community.

At the gathering of silat exponents, Najib was reported by Astro Awani as saying that,

"Red Shirt rally", was the rise of the Malays to defend their dignity and national leaders

Speaking before 15,000 members of Pesaka from all over the country, Najib said: "Slapped once, we did not do anything. The second timenothingthe third timenothingbut the fourth time had crossed the limit. Malays also have rights."The Malays will stand up when their pride is scarred, when their leader is insulted, condemned and humiliated. It's enough, do not repeat such vengeful acts," he said.

I think most people may assume that Najib, as Umno president has now make it clear that the Malays can go on their own at running the country if the other communities were not willing to respect them as the majority and dominant race in this country.

Well, too bad for MCA, MIC and other non-Malay or non-bumiputera based parties in the BN coalition.

Actually, I'm sad that it has come to this.

But, I also think that Najib has no other choice than to take such a stand.

He was being whacked left, right and centre of late and when such an opportunity arises, he grabbed it to his advantage.

Who could blame him for that.

In my opinion, the Chinese, or to be more exact, the DAP gave Najib the Malay unity lifeline.

Bersih 4.0 was a rally too far for them.

Still, bear in mind that the seeds of all these racial posturing were actually planted way back before the last general election in 2013.

The racial sentiments played by DAP to whip up support among the Chinese community in the run-up to the general election was too obvious to deny.

There was DAP secretary-general Lim Guan Eng, who while speaking in front of thousands of Chinese called upon them to go against the Barisan Nasional government as he contended that they were being treated as second, third, fourth or even fifth class citizens.

Then there were other race based issues being brought up to further inflame, especially the Chinese sentiments.

They even accused BN, or to be more exact Umno of practicing apartheid to oppress the Chinese who are the most prosperous and advanced community in the country.

I was in Johor at that time and I felt the surge of anger among the Chinese electorate as the DAP's campaign built up to a crescendo in the final weeks before the general election.

The mammoth crowd of up to 300,000 people, mostly Chinese, at DAP campaign gatherings in Taman Sutera in Skudai was the ultimate show of force in the fight for the crucial battle for Gelang Patah.

I was in the thick of it.

Former Johor Menteri Besar Datuk Abdul Ghani Othman who was about to retire from politics was roped in back by Najib to stand against Guan Eng's father, DAP supremo Lim Kit Siang in the Chinese majority constituency. 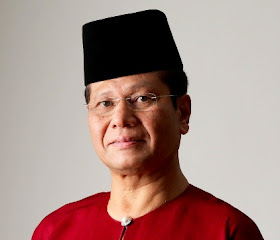 It was the first time an Umno leader was fielded in such an area.

I wonder if current Johor Menteri Besar DS Mohamad Khaled Nordin would ever be willing to do the same.

I learnt that the aim of fielding Ghani against Kit Siang was to stem the Chinese electoral tide which at that time was building into a tsunami.

It was an appeal to the Chinese community, especially in Gelang Patah - here is a good moderate Malay leader who had done a lot for you. Please choose him over a Chinese leader who had done nothing except telling you all to topple the Malay-led government.

It was an impossible mission.

Admittedly, I was emotional when I wrote this the next morning,

The posting remained as the the most read of this blog's for over a year.

Regular readers of this blog may noticed though that I had somewhat calmed down since then.

One of them was TS Mohd Ali Rustam, then the Chief Minister of Malacca.

Ali is the chairman of Pesaka which organised the Red-shirt rally.

He made it plain after the general election that the Chinese voters in the constituency which he contested betrayed him despite his good track record as the Chief Minister and the friendship he supposedly enjoyed with members of the Malaccan Chinese community.

I remember Ali being quite bitter about it.

Unlike Ghani, who never publicly blamed the Chinese electorate of Gelang Patah for his defeat, Ali didn't mince his words about it.

I have the opportunity of talking to Ghani several times over these past two and a half years since the last general election and not once did he say any unkind word about the role of the Chinese in ending his political career at such an unpleasant note.

He merely blamed DAP's racialist tactics for what happened.

But not all of those moderate Malay leaders are like Ghani.

Most became hardliners like Ali after the Chinese tsunami.

DPM DS Ahmad Zahid Hamidi who was previously never really known to be a Malay champion suddenly became sorts of one after making some tough remarks in defence of what supposedly Malays' rights.

The Umno vice-president went on to be elevated to what he is now on the ticket of being a Malay hardliner.

It's the popular stance to take among Umno leaders now.

As it turned out, even Najib, who is the most moderate of them all has turned tough.

Well, it can be argued that he is being so to divert the public attention from his many problems, but still, the fact remains that we now have a set of Malay leaders who are hardliners running the show.

The moderate Malay leaders were either swept away by the Chinese tsunami of 2013 or transformed by it.

Bersih 4.0 actually completed the process when it prompted the Red-shirts backlash which cemented the positions of the Malay hardliners.
Annie at 02:11
Share